Hamish MacDonnell, über britnat and Spectator resident airhead, is having a difficulty time with cognition. In this stream of consciousness riff that passes for an article he opines:

“Salmond believed, right from the moment he announced his planned timetable for the referendum, that the Commonwealth Games would provide the Yes campaign with a massive emotional and electoral boost just weeks before polling day.”

And you know this, how, Hamish? You’ve no idea what Salmond thought. You pulled that straight from that orifice wherein the sun don’t shine, didn’t you?

“Even the official emblem of the Glasgow Games – a jaggy thistle – seems to have been deliberately designed to prickle and get underneath those prissy white strips worn by the dastardly English.”

Uh, it was designed by a wee girl named Beth from Cumbernauld, ya plonker, whom we can be fairly sure wasn’t thinking about annoying anyone. Hamish assures us he ” … can distinguish between patriotism and nationalism – unlike many in the SNP”.

Hamish, you can’t even distinguish the imaginative representation of a 12 year old girl from a dastardly Nationalist conspiracy, ya eejit.

You’re not the brightest bulb on the Christmas tree, are you, old fruit?

With two months to go, new poll suggests NO is hemorrhaging support 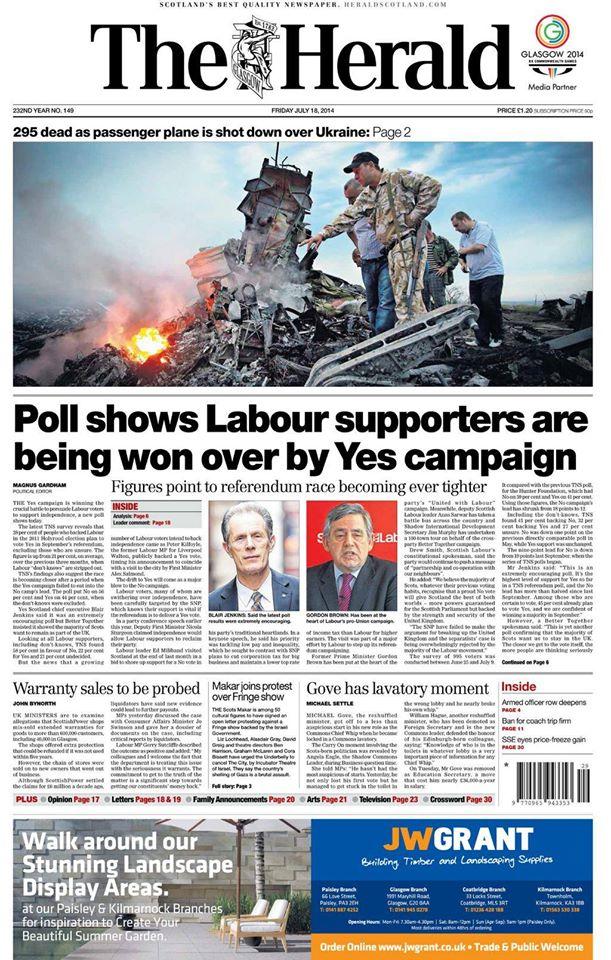 NO lead drops to single digits

Considered by many to be rabidly pro-Union with surveying methodologies that favour NO, the TNS BMRB’s new survey reveals there has been a six percent swing in favor of YES compared to their previous poll. “English athletes at the Commonwealth Games have been briefed on what to do if they are booed amid fears that Scots nationalists could use the “friendly games” to voice animosity towards the Auld Enemy.

“[English] athletes are aware that anti-English sentiment may be running high among some Scottish sports fans.”

“A Games insider said that a “small number” of English athletes had raised the subject of possible booing and had been told not to react to it. “

It appears Gordon Rayner (@gordonrayner) confected this vacuous narrative. Nowhere in it does he provide corroboration, or citation, or even a name.

Shouldn’t the author of this apparently scurrilous fiction furnish some evidence to back his claims? He might then present verifiable examples of Scots booing English track and field athletes.

Well of course he won’t do that because he can’t. Absent corroboration, this article begs to be viewed as a transparent attempt by Gordon Rayner and his employer to foment racial unrest and endanger the peace. As such it clearly falls within the scope of behaviour proscribed by law.

If this story were to contribute to unrest during the games, Rayner and the Telegraph should be held criminally liable. What a thoroughly scurrilous piece of Goebbelesque racist propaganda from the Labour Party’s senior apparatchik, the noble lord, Baron Soley of Hammersmith (Here’s his entry in Debrett’s).

In this New Statesman article he seeks to equate Salmond to Farage (nowt new there then), and warns Scots of the inevitable catastrophe awaiting them if they dare have the temerity to choose to be masters in their own house. The English will rightly retaliate he argues <yawn>. Yet there was something particularly galling about the cynicism, arrogance and sense of entitlement, of this careerist Labour pol that could not go unrecorded and unchallenged.

Soley: “The 1707 Act of Union brought to a halt the internecine conflicts across the border”. No it didn’t, Baron. Have you never heard of the ’45 Rebellion, and the  century of ethnic cleansing and genocide that was the Highland Clearances?

Soley: “Many people have been arguing this case for some years [for a federal UK] now and breaking up the family of nations that is the UK is a serious distraction from that goal “

This is boilerplate New Labour double-speak predicated on the belief that the electorate is as thick as pig shit and cannot see through its glaring absurdity.

The manta and warning from the likes of the noble lord has been that independence would put an end to devolution. Doh!

Yes indeed it would since all power over Scottish affairs would reside with the people of Scotland. Independence is in fact the only devolution max on the table.

Baron Soley: “This knowledge should lead us naturally to the idea of the UK developing a truly federal system designed for the modern world”.

Clive, your lot had a HUNDRED YEARS to deliver a federal system and you never did. With the best will in the world, why should we believe a word you say? You’ve been a government and party apparatchik supping at the public trough all of your adult life, and you have done precisely nothing to deliver a federal state.

You’ve signed on to Labour’s increasingly draconian immigration policies haven’t you? Yet you have the unmitigated gall to imply Salmond, whose policy genuinely is for open borders that encourage immigration, is as much a xenophobic racist as Farage!

The wiki open rights group note that “[Soley is] In favour of ID cards, mainly due to immigration“. This is the guy who excoriates Salmond for being another Nigel Farage?

You’re all Chutzpah and brass neck, aren’t you Baron?

Soley: “… it is naive for Salmond to believe that the rest of the UK will accept Scotland walking out … taking their share of the wealth, but then knocking on the door the next day and saying they want to use the pound” .

This surely reveals the uncomprehending arrogance of Baron Soley. Salmond is many things, but naive he’s not.

Scots PAID FOR IT, in treasure, by the sweat of their brow, and with their very lives, to preserve the state these assets underpin.

And please, enough of the fiction about the UK surviving its own dissolution. When Scotland dissolves that binary union, the United Kingdom of Great Britain that it shares with England (incorporating Wales), there will be no UK. How could there be?

Consider the tautology, Baron: When the Union is dissolved, the Union ceases to be.

Soley: “The UK has been, by any standard, a remarkably successful union, creating peace and prosperity while retaining cultural differences.“

Well, its certainly been good for you, hasn’t it, Baron? You’ve done alright. But what about the rest?

We usually hear the “most successful union ever” yada yada, when some labour pol like your good self, makes a flying visit to Scotland to open another food bank.

Labour controlled Scottish politics for 60 years, yet poverty is so ingrained in Scotland’s largest city that babies are born today carrying an epigenetic predisposition to disease and early death. You had sixty years to do something about that, Clive, and you did sweet FA.

In parts of Glasgow, residents face a lower life expectancy than that in Baghdad by a margin of 13 years. How can you, amid your pampered taxpayer-bankrolled opulence, lecture Scots about the Union’s success and prosperity, when you have done naught to alleviate the misery of so many of your fellow citizens you pretend to care for and serve?

At long last Baron, regaled in your finery, luxuriating in your self satisfaction and generous publicly-funded pensions and stipends, have you no thought for those you have failed? Have you no sense of shame?

Well of course not.